At last I'm able to log on and hope to download some photos at last. Various boring technical problems, so posts so far have been via email to Tim.

It is another world here and for all that we read of hear of the poverty and the heat, nothing quite prepared me for actually being here. It's Friday morning here and the others in the delegation are returning to Oxford tomorrow. I'll move out of the hotel and will stay for a few days with a doctor called Aurora. She spent some time in Oxford a few years ago and stayed with Jane Mercer and has kindly offered me her spare room.

So far this morning I visited the covered market of León, which is sort of like ours but with some very strange-looking fruit and veg. I then went to the cathedral and climbed to the roof. Obviously, being the sort of person who often climbs church towers... (how many have fallen off chairs reading this?).

Yesterday I met with some Biologists in the Entomological Museum. Once they got over their disappointment that I'm not a fellow Biologist, but a mere messenger, it was very encouraging to speak about co-operation across the continents in scientific research. I love the idea of students from Oxford coming to do field work here - as long as I don't have to crawl on jungle floors looking at bugs.
Another mtg was with a retired psychologist from Seattle who, with her Medic partner, spends 5 months per year running a small NGO. One of the things they do is run first aid training for teachers, bus drivers and all sorts of other groups. I hope to visit some of their projects next week.


We were also taken to the lovely Botanical Gardens outside of the city. 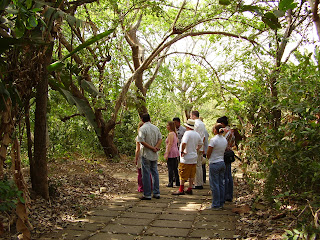 My big tale really is Wednesday, when we went "out in the field" with Nuevas Esperanzas. I sent a summary yesterday although hadn't explained clearly that the long pipeline that they are building to take water down the mountain is because the water up the mountain is absolutley pure with no arsenic, so that intention is that this will be the drinking water for the communities on the plain - there is a limited supply. They will use the water with arsenic for washing: it is only poisonous when ingested. This is the compromise solution that seems safest for the people.

Now, at last, some photos: 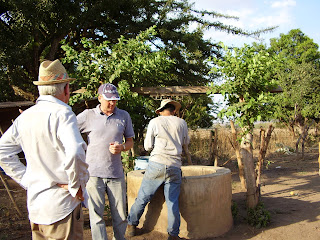 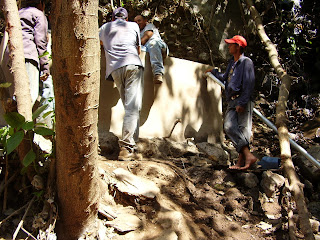 The clean water that will be piped down the volcano to the plain. This is a huge project and will involve building suspention bridges to take the pipes down the canyon to the community 4km below. 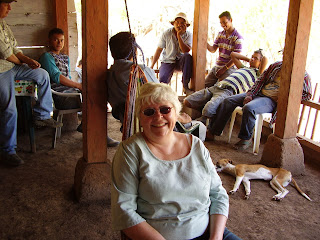 Working hard! The local people in the background were discussing forming a co-operative for their beekeeping. This is a project set up by Nuevas Esperazas to encourage diversity and they hope to export the honey to the UK.
Meanwhile Jo, Mike and John visited the bees themselves... 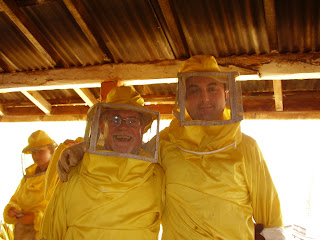 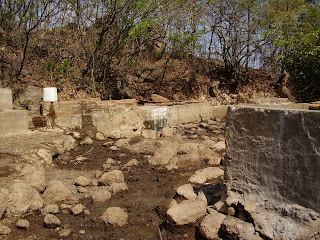 Hot water spring on the volcano 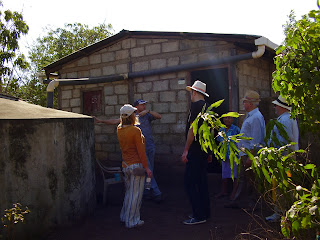 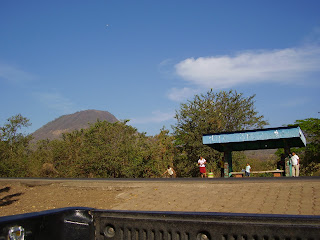 View of a volcano from the back of the pick-up 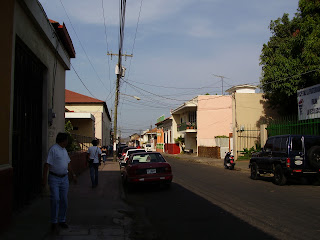 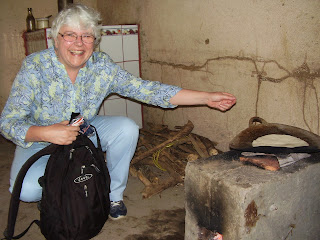 Making breakfast in the kitchen of a primary school, with funds from another Oxford organisation. (This is was a different day.) 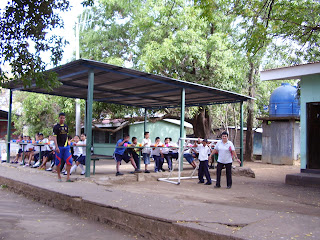 Children eating their breakfast in El Platanal Primary school. The menu was tortilla, beans and rice and a cereal drink. Note the water tower - base made of asbestos...

Thursday 28th February, 7pm
Wednesday was a big day with Nuevas Esperanzas, an organisation whose projects  we have helped to fund from Oxford.


We set off at 7am to go to the mountains in the Nuevas Esperanzas four wheel drive, pick-up truck. Someone had to travel in the back and for the first stretch it was me!
Andrew has an interesting use of the word "road". He told us they had built roads to reach some of the remote villages. For "road" read "rough, stony, bumpy bridle way”. I was worried about riding a horse but can see they would be the best form of transport here. Even with the potholes of Oxford we cannot imagine driving up a rough stony track.

It was not a smooth ride at all, but it was far too hot to get out and walk. Especially for a wuss like me. Can you believe, when it comes to climbing volcanoes, four wheel drives are even more useful than they are in north Oxford.

We visited lots of NE projects, mostly to do with water supply - tanks to collect rainwater, storage units by fresh springs. We also went to the area contaminated by arsenic and watched as Leo, one of Andrew's employees, analysed the levels of arsenic. Very sad. The WHO standard is 10 parts per billion and we witnessed levels of 35, 50 and over 200.

I did walk, or maybe scrambled is a better description, down to see the spring where they have built a storage tank. Andrew was much kinder than my brothers ever were in helping me down the hard bits. So the earth was dry, black, sandy and very dusty and it was hot. Very Hot. The team are building a pipeline to carry the fresh, filtered water, with the arsenic removed, down to the villages on the plain some km below.

We also went to one of the apiaries that they have set up. John, Mike and Jo all donned the full suits and went to handle bees. Pete and I wimped out and sat with the locals in a veranda and had a go on the hammock. Yes people really do use hammocks!

Rural poverty is something else. It is shocking to see the very basic shacks that serve as houses here. But then I suppose if you live on the side of a volcano, you wouldn’t build a strong brick house!

There is lots more to say but we really must go…..