The oldest student in town

Yesterday morning 7-9am I sat with c 150 students; 2nd year Medicine, in a lecture about medical responses in disasters and emergencies. Nicaragua is at risk of earthquakes, hurricans and volcanoes, so this is an important theme. It was so interesting! The lecturer was very witty, making serious points using humour. He was very strict about punctuality and gave a hard time to those who were late. Oxford Brookes has a course on Development and Emergency Planning and they are interested in bringing students here. The lecturer here is very keen on this collaboration so we have exchanged email addresses and I'll follow up when home.

He, and the director of the faculty, offered to show me round the Medical School (other tours have been in research units, this was where they teach Medicine). I said that would be interesting, but stressed that I'm not a medic, but a wuss, so didn't want to see anything gruesome. Fat chance. I'll spare you the details and didn't take photos. I did not expect to see such things... It's a surprise a day here.

I moved house and am now staying with Jane and Andrew.

Later on yesterday I and Aurora were treated to lunch with another colleague of Aurora's called Edmundo. He studied his PhD in Bath and takes the word "Anglophile" to whole new dimensions of enthusiasm. He has "Sailing By" on his mobile to remind him of the BBC. The restaurant was beautiful (see below) and we had great conversations and laughed a lot. It was fun.

It was back-to-back meetings as I also met up again with the leader of the women's rights campaigners. She's very inspirational and I appreciate how lucky I am to be European. Life is much harder here, especially for women.

The vice-rector of the university is also keen to work with Oxford and yesterday's meeting was about students of Spanish spending part of their year abroad here. She fixed up another meeting today with a member of the Spanish Literature department. Lots of emails and reports to write once home. 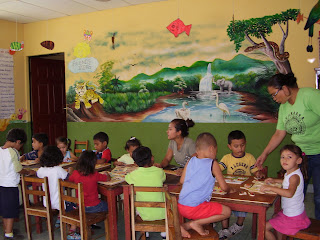 Today I visited more projects to do with schools and pre-schools, run by retired professionals from Seattle. They were great! One of their projects is teaching first aid to teachers, bus drivers and other groups. Sadly there is a lack of such training here. They said that in Seattle everyone can do CPR so it's the safest place in the world to have a heart attack. The above photo is a newly-built pre-school and is a lovely building. It has very deep foundations and is designed to be "earthquake proof" as far as these things can be, and would be the gathering point for the community in the event of a disaster. 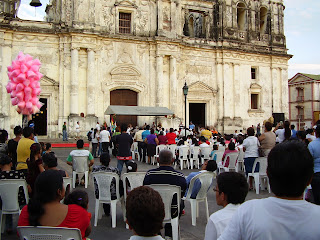 This afternoon was the postponed official opening of the renovated square by the cathedral. Jane and I received invitations from the mayor's office. A shame the others missed it as it was postponed from last week. It was quite a big event with speeches by the bishop, the mayor, the Spanish Ambassador and other dignitaries. There was a minute's silence for Hugo Chavez. His death is big news here.

Now I'll give Jane a hand with dinner. She has made a bread and butter pudding. It's over 30 degrees. But she's acclimatised and wants to make something English for the American guest who'll join us. Much as I love puddings, it will be a challenge in this heat... But then I've had worse challanges.
Posted by Jan Marshall at 17:09 No comments: