This is now going back several days - due to technical delays now resolved as I have the use of Aurora´s computer. 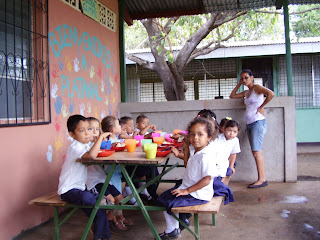 This was on our second morning here when we visited a primary school called El Platanal. It is in a rural area a few km from León and there was an issue with children being kept from school to work in the fields. The authorities are aware of this issue and support such projects, but don´t have the resources we are used to in Europe. A group in Oxford called BOAT fund a breakfast club here. Feeding the children encourages the families to send them to school and there is a rota for the mothers (but not the fathers) to prepare the food. 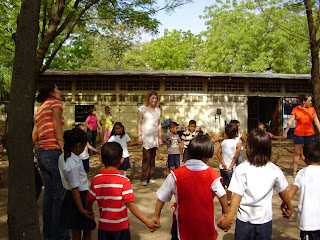 Next we went to a nursery school in León called Los Ositos (the teddy bears). We have sent funds for equipment here. Jo and Pete (he´s out of shot but was there- honest) joined in the games. 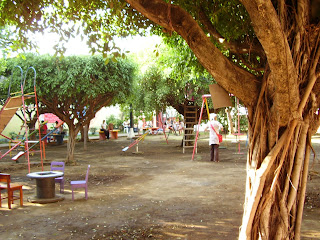 This is a play park in the city, called La Juegoteca and it felt like an oasis of cool. The council have donated the land and a group of p/t workers and volunteers run it as a play centre and sort of after school club. Families have to bring plastic bottles for recycling which are then sold to help fund it. They don´t allow litter and are teaching the children about keeping the area tidy and taking pride in their city. They encourage educational play and have a toy gun amnesty, where children can exchange violent toys for educational ones. The irony is that one mother told me that her son begged for a water pistol so he could exchange it for a toy here. An example of unforseen consequences. It was a lovely place with a small waterfall and an enclosure with tortoises. 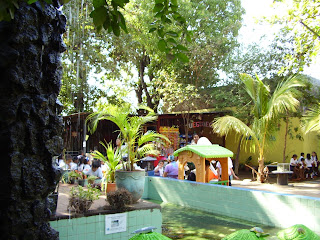 Another view of La Juegoteca. 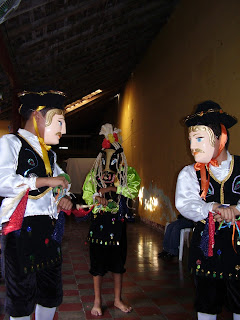 Children doing a traditional dance, which is telling some sort of story or legend but I don´t know what. This is in the NECAT centre. NECAT is another NGO with Oxford links and the centre is a sort of after school club with a library and travelling teaching resource. It is part-funded by a shop at the front, but we had such a tight schedule there was no time to buy anything so I hope to return this week. The children put on quite a show for us. 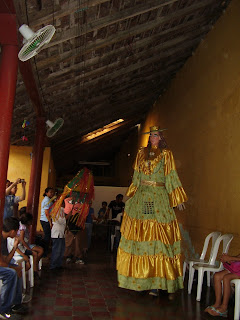 This is a "gigantona" dancing as part of the show the children had prepared for us. A gigantona, or giant woman puppet, is an important part of Nicaraguan culture and she is carried by someone under the skirts and bought out at fiestas. We have one in Oxford, which was brought over in 2008 by visitors from León as a gift to the people of Oxford. We, in the Oxford León Assn, think it should be displayed in the Town Hall. If you agree, and live in Oxford, please write to your city councillor. 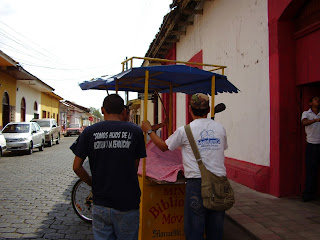 One of NECAT´s projects is this mobile teaching resource that is taken to primary schools in the city. It's a tricycle with a big box of tricks. The young man´s T-shirt says "we are the sons of the revolution and history". He is a student volunteer with this project. 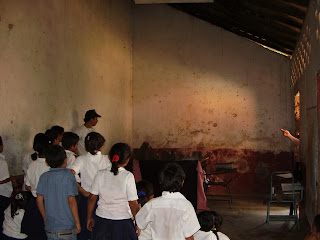 The lesson was about volcanoes and they had models of local ones. Using baking powder, sparklers and other things they put on a show but sadly I didn´t catch the full eruption. The children liked it and afterwards we were introduced and they asked us questions. I explained that we came from another country far away. "¿Like Costa Rica or Honduras?" Trying to tell then about England and Sweden was beyond their comprehension so I talked about cold and snow. One of the ladies from Lund in Sweden was there too. It is also twinned with León and our delegations overlapped.